We have an early Balthazar system scheme as a block diagram upon which we develop and prototype separate boards to an interchangable compliance. 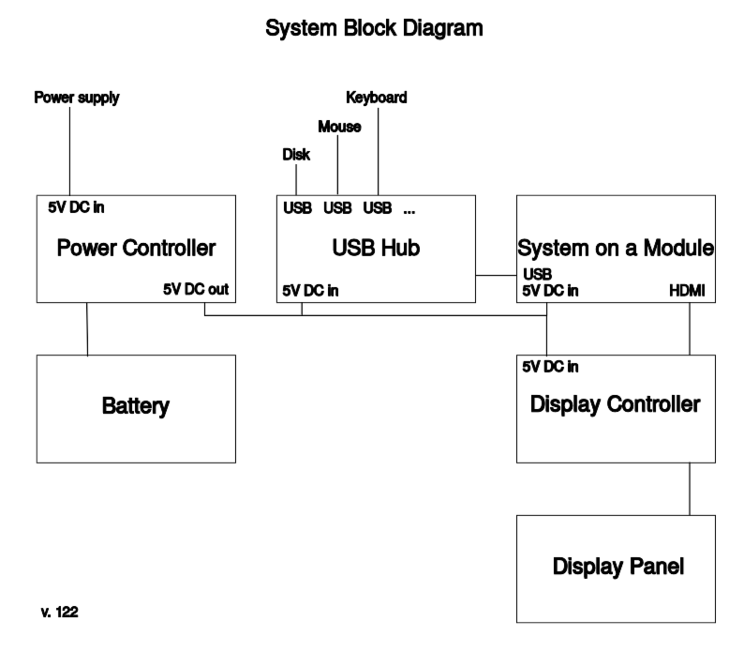 Balthazar laptop as a box consisting of: mainboard + all the perifery needed that make up a complete laptop: display, audio, keyboard, mousepad, wireless, usb, hdmi... and additionally: a buffered GPIO (general purpose in/out) connector (not that laptop usually needs it...). The technology used benefits from the current rapid mobile platform development – as do all open- source single-board computers:Banana Pi, Orange Pi 4 – and a bit more advanced Firefly- RK3399. They all use SOC (system on chip) as the miniaturized combination of CPU/GPU etc. The laptop should however be a pushed-up version of these single board computers - but still a single board computer. One format of recent computers is also the mini-pc. They are usually based on Intel or AMD laptop computer processors. LattePanda seems to be on the side of single-board-computers but uses Intel processors. Prices are also pushed up. The interchangeable module should basically be the board itself, while the stable part should be the skeleton: a specifically designed housing with display, keyboard, audio, touch-pad, power supply. To upgrade – one buys a new board and inserts it in the place of the old board.

If the keyboard PCB is meant to act as the complete top cover then it's height is also defined by the LCD -> 180mm. The touch-pad module would fit above the keys (as was envisioned in the broad design considerations recently) – not as usual below the keys.

The two loudspeakers go to the usual positions left and right – at the two top edges of the full-size keyboard pcb. In this way the acoustic horn effect will be at its best with LCD screen up.

Ideas and some crude sketching of I/O boards and inner guts: 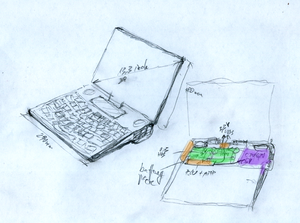 The mechanical skeleton built in this manner needs additionally an USB hub board on the top right which also takes in all the necessary inner periphery (camera, keyboard). There are some of these hubs on the market, but could be made here additionally. On to four hub is prefectly ok - two externally accessed USB-connectors and two internally used for camera, keyboard.

The keyboard in this rudimentary fashion acting as the top is also very thin – maybe defining the triangle-like side cross-section – since there must be enough space at the top/ back/ bottom of the lower segment. The battery pack consisting of LiIo batteries are standardized in diameter – so this defines the height. About the same size are the vertically positioned USB-A female plugs. The loudpeaker sound greatly benefits from this volume behind.

Let's repeat: the interchangeable CPU/ GPU upgrade module would basically be the mini-computer mainboard itself. To upgrade – one buys a new board and inserts it in the place of the old board. If the software and file system could be kept on some SSD version of mass storage – this would be an advantage (or maybe a necessity...).